201391 minComedy, Khanevadegi
+ Playlist
Sign in to add this movie to a playlist.
0

The story of the film is about the early judgment of people, it tells a story that one of these misplaced judgments changes people’s lives and… is the story of a criminal named Nasser who has just been arrested and everyone in the neighborhood finds out To be. On the other hand, an engineer named Nasser disappears the day before his wedding, on the very day that Nasser Khalafkar was arrested. Since both families do not find any trace of Nasser following him, the film Life under Construction, directed by Seyed Mohsen Mir Hosseini, was made in 2014. This film is a product of Iran and is in the comedy and family genres. Actors: Abbas Jamshidifar, Gholam Hossein Lotfi, Saeed Pirdost, Sanaz Samavati, Behrad Kharazi, Negin Motazedi, Fahimeh Soleimani, Tahereh Alaei, Mansoureh Ilkhani, Hossein Fathi, Ehsan Sharifloo, Saghar Ahmadifar and with the presence of Amir Ghaffarmanesh and. . .

Be the first to review “Zendegi Dardaste Tamir” Cancel reply 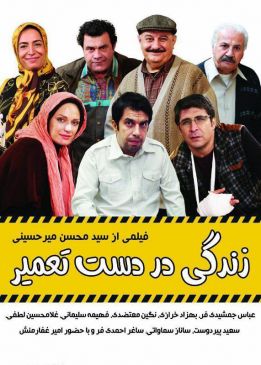