Yavar 1353 movie “Yavar”, a truck driver, meets a man named “Karim” in an accident and they soon find a sincere friendship. This friendship is such that when Karim kills someone in a serious accident, the helper takes responsibility for the incident and is sent to prison. Yavar later realizes that Karim did not fulfill his right to friendship, and so when he is released from prison, he seeks revenge against him. It is reported that he died and that he had entrusted his brother and sister to him before his death. The helper fulfills his last request despite his upset. Actors: Forouzan, Junit Arkin, Fakhreddin, Taghi Zohori, Ali Zandi, Yasmin, Mohammad Reza Rafiei, Mirzadeh Tataei, Dariush Talaei, Fereydoon Nariman, Mohammad Abdi

Be the first to review “Yavar Iranian Movie” Cancel reply 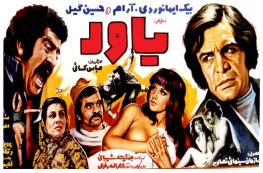