Asid Morteza (Behrouz Vosoughi), who is a pigeon fancier, lives in Kashan with his blind baby (Jaleh Aloo). He catches a collar pigeon that all the local pigeon fanciers are looking for. The baby finds the collar bad and asks Morteza to release the pigeon. On the other hand, Asid Morteza’s uncle, Asid Mustafa (Nasser Malek Matiei) sends him to Shiraz to propose to his fiancé Touba (Afarin). Morteza and Touba become interested in each other and get married. Morteza takes Touba to Kashan, but does not tell his baby and uncle about anything. Morteza’s baby notices their connection and curses Morteza, imagining his betrayal. Mustafa arrives and hears the baby talk. He, who does not know that Touba has become Morteza’s wife, tells “Abbas Garichi” (repression) and “Javad Khaledar” (Bahman Mofid) who are enemies with Morteza to kill Morteza, but Touba tells the truth to Asid Mustafa and he says that he killed Morteza Gives up. On the other hand, Abbas, who is looking for a collar pigeon, inadvertently kills Touba. Morteza takes revenge on Abbas, but at the last moment, he is shot by the constable.

Be the first to review “Toughi Iranian Movie” Cancel reply 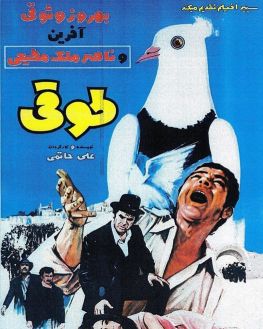