The screenplay of the film “Doubt” is based on the work of William Shakespeare. And there is a boy named Siavash who takes over their family wealth after the death of his public father. Siavash who falls in love with his cousin Mahtab. Siavash learns of his uncle’s secret marriage to his mother. According to stories, Siavash finds out that his father has been killed and one of the perpetrators of his murder. گردان About the director: Varouj Karim سی Masihi is the editor of Iranian cinema and television. Among the most important works of Varuj Karim-Masihi are his activities in the film Five Stars, the film Days of Life and the film The Last Curtain. He started his professional career in cinema and in 1990 he worked as a director in the film The Last Screen. Although the success of this work was not more than its next landmark works such as the five-star film, but it is a good experience for Varooj Karim Masihi and he experienced collaborations with artists such as Farimah Farjami, Dariush Arjomand, Niko Kheradmand and Saeed Poursamimi. He also spent a period of hard work in the field of cinema and television in 1392 and has been involved in the production of important works. He appeared in 3 important cinema films this year and introduced himself to the community of artists. The most important works of Varouj Karim Masihi this year are his work in the film Five to Five directed by Tara Otadi, his activity in the film The Last 50 Steps as an editor and his activity in the film Five Stars as an editor. Perhaps one of the most important parts of Varouche Karima Christian’s biography has been his work in the five-star film. Varooj Karim-Masihi In 1392, the five-star film was active as an editor, who was able to establish his place among the people of the cinema space with his skill.

Be the first to review “Tardid Iranian Movie” Cancel reply 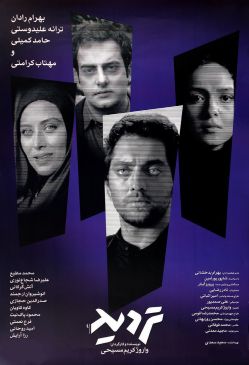