1973112 minAdventure, Drama, Ghadimi
+ Playlist
Sign in to add this movie to a playlist.
0

Zayar Mohammad’s film Tangsir when he wants to tame Sakineh Varza, who has escaped; He harms the cow and rebukes Sakineh that if she has the strength and the arm, she can go and get what the Bushehr elders have eaten. This incident, Sakineh’s aggression and humiliation towards the pilgrim Mohammad, causes the pilgrim Mohammad to take action from Agha Ali Vakil, Abdul Karim Haj Hamzeh, Abul Gandeh Rajab and Sheikh Abu Turab Borazjani. They humiliate the pilgrim Muhammad and say that his capital has been burned in the deal. Pilgrim Mohammad pulls out his old rifle and rusty ax from under the ground, and after saying goodbye to his wife Shahro, Nouri Kasraei seeks revenge. After killing Abdul Karim Haj Hamza and Sheikh Abu Turab at the hands of the security forces, he took refuge in Baron Asator’s food shop and asked Ismail “Parviz Fanizadeh”, a student of Baron Asator, to contact his father-in-law and prepare the city and his children for the trip.

Be the first to review “Tangsir Iranian Movie” Cancel reply 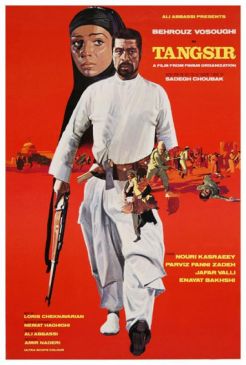