It tells the story of a person named Bahram who suffers a brain death in an accident and comes back to life with a miracle in which funny things happen «.. The” first condition “happens to have a good and funny subject: Bahram (Kambiz long ago) in Supporting Akbar (Akbar Abdi) against his evil creditors, he gets involved with them and inevitably runs away. In a relatively long chase, Bahram crashes and suffers a concussion and goes into a coma. Doctors who have given up hope of his treatment suggest donating Bahram’s organs to needy patients and receiving large sums of money in return. This offer tempts Bahram’s family and changes the situation. But just as they are buying and selling Bahram members and stylish and fresh home furnishings, Bahram regains consciousness and troubles begin. Screenwriter Shahab Abbasi has narrated this fascinating storyline with new and funny complexities and included appropriate creations in his writing, but the problem is that these creative situations, in execution, have not worked well and pleasantly and have remained practically uncharacteristic and cold. The weak acting of the actors also contributed to this process, so that Abbasi’s script was devoid of any strength to accompany the audience.

Be the first to review “Sharte Aval” Cancel reply 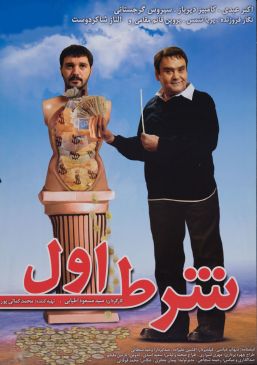