201893 minEjtemaei, Ghadimi, Khanevadegi
+ Playlist
Sign in to add this movie to a playlist.
0

“Shocking news arrives at the wedding of two young couples. The sister of one of the newlyweds and her little daughter “Sharareh” are arrested for attempted murder. Sharareh, a young girl, constantly confesses that I killed my father and… ” کرد. According to statistics, Sharareh is the 13th activity of the actors on average. 7 actors of Sharareh have experienced their first serious acting activity in this work, in fact, they have been the first 7 films in Sharareh: Shahrokh Foroutnian, Nahal Okhot, Sam Shayeghi, Muslim Bashareh, Mitra Banai, Sanai and Mozaffarian Also, Sharareh director Siamak Shayeghi made his first collaboration with actors such as Gholamreza Tabatabai, Soroush Sehat, Shabnam Tolouei, Kourosh Tahami, Laleh Eskandari, Alireza Thanifar, Niko Kheradmand, Mina Jafarzadeh, Nematollah Gorji, Jahangir Samimi-Fard and Hossein Afshar in this work. Is. Among Sharareh actors, the first 249 collaborations took place, in other words, in this film, a cooperation relationship was formed between each of the 24 actors, and 249 collaborations took place for the first time in Sharareh. Do you know which artists in the movie Sharareh have died? Among the actors and actors of the film, 2 people have traveled to Diar Baghi and are no longer with us: the late Gholamreza Tabatabai and Niko Kheradmand.

Be the first to review “Sharare Iranian Movie” Cancel reply 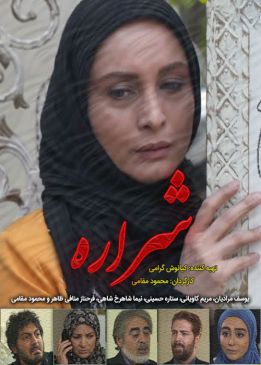