200290 minDrama, Ghadimi, Tarikhi
+ Playlist
Sign in to add this movie to a playlist.
0

At the beginning of World War I, although Iran declared neutrality in order to prevent the destruction of the country, the Allies (Russia and Britain) on the one hand and the allies (Germany and the Ottomans) on the other hand engaged Iran in political conflicts. The subject of the story describes parts of these interventions. In such circumstances, at the suggestion of patriots such as Mostofi and Modarres and others who saw the constitutional government lacking the military and executive capacity to deal with the situation, Ahmad Shah agreed to move the court headquarters to Isfahan, which is the center of Russian and British opposition. To the anti-colonial forces to make its condition for not doing so, the evacuation of Bushehr by British forces and the withdrawal of Russian forces from Karaj and Qazvin and northern Iran. Embarrassed by what was originally a diplomatic bluff, the Russian and British ministers asked the king to give up, and in return they accepted the king’s terms, but made a new request to the king, which was to cut ties. The emperor of Iran with his mistress Countess Legonti, the daughter of the Austrian sovereign minister (a country that is at war with Germany and Russia with the support of Germany), whom the emperor fell in love with. The patriotic emperor of Iran, violating all his love for the Countess, to accept Iran, accepts this condition.

Be the first to review “Shahe Khamoosh” Cancel reply 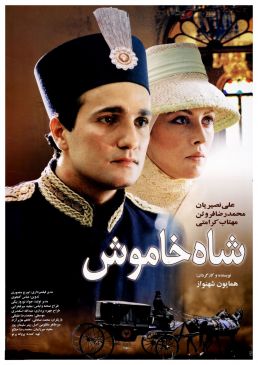