2001Drama, Ejtemaei, Ghadimi
+ Playlist
Sign in to add this movie to a playlist.
0

Yalda Night Movie: Hamed (Mohammad Reza Forootan) sends them abroad after ten years of living together, despite his great love for his wife Mahnaz (Elham Charkhandeh) and his Nazi son. Mahnaz’s excuse for traveling is more freedom, but after leaving the country, she begins to behave suspiciously. Hamed’s friends abroad inform him that Mahnaz is in a relationship with a person named “Mr. Sharif” (one of Hamed’s old friends). Hamed, who is very emotionally sensitive, becomes suspicious of his wife and locks himself in the house. During this time, he accidentally meets a divorced woman named “Priya Ferdowsi” over the phone and, on Priya’s advice, reviews his past. He gradually realizes that Mahnaz did not love him and lived with him without love. After a while, Mahnaz informs Hamed by phone that in order to obtain a residence permit, she must divorce Hamed and enter into an honorable marriage. Hamed spends a year in a state of confusion and depression. At the end of the film, Priya visits Hamed. Many know Poorahmad as the director of this film. After six years away from the cinema and the successful production of the TV series Sar Nakh, Pourahmad decided to make one of the most personal works of his career.

Be the first to review “Shabe Yalda” Cancel reply 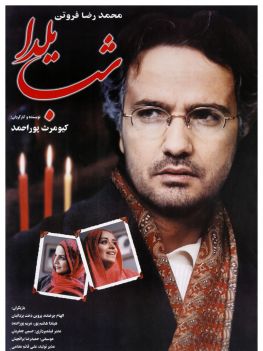