198991 minEjtemaei, Ghadimi
+ Playlist
Sign in to add this movie to a playlist.
0

In the synopsis of the burning spruce, seven families live a miserable life in an old house called Kharababad. Their only pleasure is that they entertain themselves every night with Mohammad TV, which is the patron saint of theaters in Lalehzar. One day the TV is stolen. Mansour, Mohammad’s brother, and Haj Amu, the landlord, become suspicious of the tenants and search all the rooms of the ruined houses, but are not arrested until it becomes clear that the thief was none other than the owner of the TV. Bijan Amkanian is an Iranian film and television actor. He was born in 1332. Among the most important works of Bijan Amkanian, we can mention acting in the movie Rokh Divaneh, the movie Good Good Bad Julf and the series Fault. Amkanian first appeared in cinema and in 1981, at the age of 28, he starred in the film Sunshine, directed by Mehdi Sabbaghzadeh.

Be the first to review “Sanoubarhaye Suzan” Cancel reply 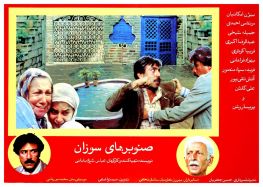