Hello’s movie: Habib Khalkoub (Mohammad Ali Fardin) is released from prison and marries Zari (Marjan), who is a singer, and befriends Morteza (Morteza Aghili), who was Zari’s supporter ; Amir Khan (Bahram Vatandoost), who is the manager of the cafe, fights with Habib to get Zari back; But he is shot by an unknown person. Habib was convicted and taken by train to Markaz Prison. The train derails and Habib escapes; But the newspapers write that Habib has been killed. With the help of Morteza, Zari starts singing again and they travel to different cities. Zari crashes into Lily (Arezoo Ghaffari) ‘s car and Lily takes her home. When Iraj (Mohammad Ali Fardin), Lily’s husband, comes home, he finds out that he is Habib. Habib explains to Zari that when he met Lily, he intended to commit suicide; Because a man has deceived him. Lily agrees to take her foot out of their lives. ….

Be the first to review “Salam Bar Eshgh” Cancel reply 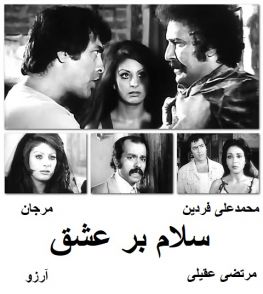