In short, the story of the film took place in 1392 and begins with a modern atmosphere. Mehrdad Parham (Siamak Ansari) is a lawyer who lives alone in the north of Tehran. Her fiancé (Azadeh Samadi) is studying in France and she has to go to the bank branch at 5 o’clock to pay the bank installment to save her house from being confiscated by the bank. In the meantime, many things happen to her that the story And each of them indicates the social problems and anomalies that we deal with every day and may have become normal for us. From the presence and attack of people in the subway to ride to the unfavorable conditions of intra-city trips and hospitals in the country. The film was released on July 17, 1996 in a private screening. The presence of the then government spokesman, Mohammad Baqer Nobakht, was one of the remarkable points. Other prominent figures in this ceremony include Adel Ferdowsipour, Farzad Hassani, and Reza Attaran.

Be the first to review “Saat 5 Asr” Cancel reply 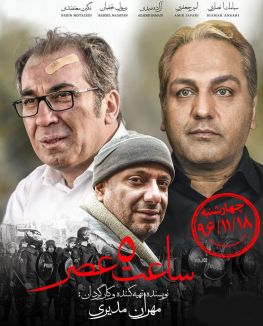