197591 minAction, Family, Ghadimi
+ Playlist
Sign in to add this movie to a playlist.
0

Comrade movie: Comrade movie: Zabih (Iraj Ghaderi) and Reza (Bahman Mofid) vow to avoid wrongdoing. Reza is interested in Aqdas (Nouri Kasraei). Reza fights with several people in support of Zabih and is imprisoned. Aqdas comes to Tehran from Mashhad and seeks Reza. He takes refuge in the public house of Turan Khanum (Parvin Soleimani). Zabih falls in love with him when he sees Aqdas. Reza is released and goes to Mashhad with Zabih; But he does not find the Holy. Zabih fights with Aghavali brothers (Nariman Shirifard and Mohsen Arasteh) over Aqdas. Zabih confronts Reza with Aqdas so that he can propose to Aqdas for him; But when he realizes that Aqdas is Reza’s beloved daughter, he leaves her… Rafiq director Iraj Ghaderi has experienced his first collaboration with actors such as Nouri Kasraei, Mohsen Arasteh, Maryam Safa, Maryam and Azita in this work. actors:

Be the first to review “Rafigh Iranian Movie” Cancel reply 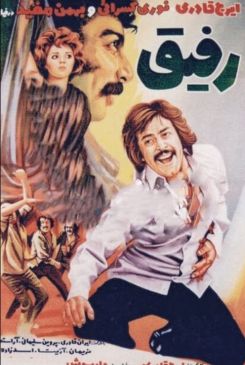