Qaysar, a high-quality, colorful film, is being desecrated by one of Abmangal’s brothers, Mansour (Jalal Pishvaian). Fati, after writing a letter to his mother (Iran Daftari) and his uncle (Jamshid Mashayekhi), commits suicide and dies in hospital. Farman (Nasser Malek Matiei), Fati’s older brother, goes to the Aq Mangul brothers’ shop after learning about it. Because he had previously sworn never to use tools such as knives, he confronted the Abmangal brothers with empty hands and was surprised and killed by Mansour’s two brothers, Rahim (Gholamreza Sarkub) and Karim (Hassan Shahin). Qaisar (Behrouz Vosoughi), Farman’s younger brother, returns from a trip to the south and… .. Qaisar, the film of Masoud Kimiaei, produced in 1348, is the second work of this great director of Iranian cinema. This film, starring the best cinematographers such as Behrouz Vosoughi, Nasser Malek Motiee, Jamshid Mashayekhi, Iran Daftari and Pouri Banai, narrates a character named Qaysar (Behrouz Vosoughi) who, after returning from a business trip, notices the suicide of his sister Fati for a stained reason. His infallibility is caused by Mansour Ab Mangal (Jalal Pishvaeian) and his brother Farman (Nasser Malek Matiei) is killed by Ab Mangal brothers (Jalal Pishvaian and Gholamreza Sarkoob and Hassan Shahin) and seeks their blood. Qaysar, which is one of the re-launching works of the new wave of Iranian cinema, became popular among the general public and even most critics, and in a way, Qaysar became a myth among Persian-language films and even among the general public.

Be the first to review “Qeysar Film” Cancel reply 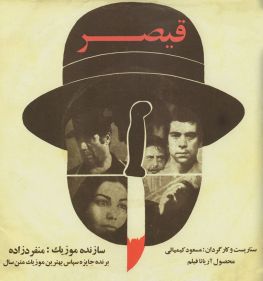