2016Comedy, Khanevadegi, Teenage
+ Playlist
Sign in to add this movie to a playlist.
0

An octopus rules the castle from inside a cave. He uses “Bell Yes” to trap the deer and drink their body extract, but the deer escape the castle with a white-fronted plan. On the other hand, the mother of the white-fronted deer has returned to take the deer back from Salar, his stepfather, and the white-fronted deer wants to return to his mother because of the Salar’s resentment, but the story of the second film also tells the story of a terrible wizard named Octopus. To become it, you need to drink deer extract. The extract of the common deer he drinks lasts only a few days, and the octopus instructs the scientists about it to discover the secret to an eternal extract. It is discovered that the extract of the white-fronted deer (played by Terlan Parvaneh) is the only extract that can have a lasting and eternal effect, and here the octopus of its agents, including a person named Bell Yes, short-horned (played by Pejman Bazeghi) is looking for the deer. The forehead turns white. White Forehead 2 is a film directed, written and produced by Seyed Javad Hashemi, produced in 2017. This film is the second part of the octopus trilogy and the octopus sequel (white-fronted deer) and was released in Iranian cinemas on October 9, 2016. The sequel of this episode, called White Forehead 3, was made in 1397.

Be the first to review “Pishooni Sefid2” Cancel reply 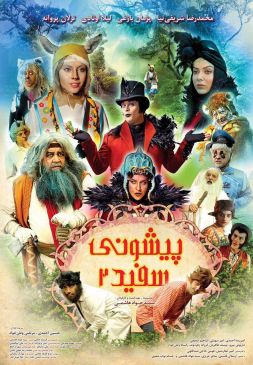