200592 minEjtemaei, Ghadimi
+ Playlist
Sign in to add this movie to a playlist.
0

In the summary of the story of the 50 million offer, a young couple needs money to cross the border. They decide to kidnap a movie star, and on a rainy day, they carry out their decision. In a house in the north of the country, he is imprisoned and told to call his mother and tell her to prepare fifty million tomans. About the director: Mehdi Sabbaghzadeh is the director of Iranian cinema and television. One of the most important works of Mehdi Sabbaghzadeh is directing the series The First Choice, the series Shahed and the series Grandmother Thieves. Mehdi Sabbaghzadeh started his career in cinema and in 1981 he worked as a director in the film Sunshine. Although the success of this work was not more than its next landmark works such as the first selection series, but it is a good experience for Mehdi Sabbaghzadeh and he experienced collaboration with artists such as Ali Nasirian, Hossein Parvaresh, Bijan Amkanian and Mahboubeh Bayat.

Be the first to review “Pishnehade 50 Milioni” Cancel reply 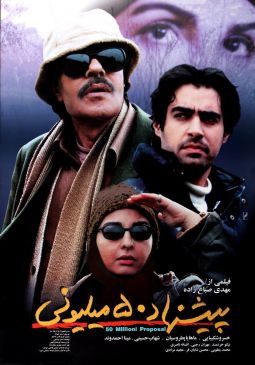