200693 minEjtemaei, Ghadimi, Khanevadegi
+ Playlist
Sign in to add this movie to a playlist.
0

The offside film behind the scenes tells the story of girls who are willing to do anything to watch the Iran-Bahrain match for Iran to enter the World Cup, so that the place of those who lost their lives in the Iran-Japan match is not empty. They each try to enter the stadium in disguise, but a number of them are arrested because women are not allowed to enter the stadium. Eventually, they are taken to the committee by the captured soldiers, but on the way, the streets become crowded due to Iran’s victory in the game against Bahrain, and the girls thus escape. The critics’ opinion of this film was praised by many critics. Raton Tomitos, a site that collects comments, reported that 97% of the 76 critics viewed the film positively. Metacritic reports that of the 25 reviews of the film, 85% were positive. Sima Mubarakshahi, Safar Samandar, Shayesteh Irani, Mohsen Tanabandeh, Mohammad Khairabadi, Aida Sadeghi, Masoud Khaimakboud, Golnaz Farmani, Mohammad Reza Gharabaghi, Mahnaz Zabihi, Hadi Saeedi, Nazanin Sediqzadeh, Masoud Ghiasvand, Roshan Ali Khafari, Melika Khafari , کریم خدابنده‌لو. With eighty thousand spectators of the Iran-Bahrain match. (All the female actors in this film are theater graduates)

Be the first to review “Offside 2006” Cancel reply 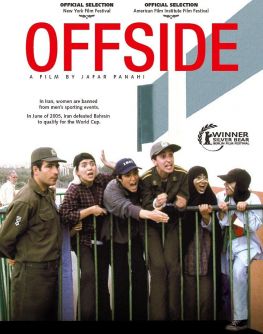