1978108 minAction, Ghadimi, Khanevadegi
+ Playlist
Sign in to add this movie to a playlist.
0

Southern Shark: Akbar, Nader, Abbas and Reza, who have been friends since childhood, each pursue their own dream: Abbas and Nader wear military uniforms, Akbar joins his uncle’s group of smugglers; Reza, who is paralyzed, has no desire other than to continue his friendship with the three. Masoumeh, Reza’s sister, and Akbar are interested in each other. Akbar gained prestige among the members of the smuggling group and was nicknamed the “Shark”. Akbar kills a gendarme while transporting a consignment of smuggled goods and goes to Abbas’ house with a wounded body. Abbas hands him over to police, and he is sentenced to death in court. Masoumeh goes to meet Akbar and gets married to him. Prior to his execution, Akbar requested that Nader be executed. 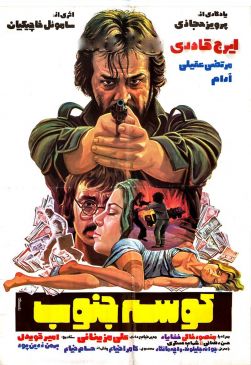