King Of The Hearts

1968135 minAsheghaneh, Ghadimi
+ Playlist
Sign in to add this movie to a playlist.
0

The movie The King of Hearts: The King of Hearts: A young couple lives away from each other for years during an accident, each assuming that his wife has died. The man becomes a famous singer and the woman loses her sight in an accident. Years later, the man accidentally meets a girl and, without knowing what the girl has to do with him, treats the girl’s mother and his wife. The man intends to marry a wealthy woman, but on the wedding night, the wife and child come to thank him, and thus the old couple regains each other after a long time and begins a new life together. Fardin received the Thanksgiving Award for Best Actor for his role in the film. Fardin was nicknamed the King of Hearts by starring in this film. Actors: Mohammad Ali Fardin, Azar Shiva, Leila Forouhar, Mohammad Ali Tabrizian, Victoria, Habibaullah Blour, Jamshid Mehrdad, Niktaj Sabri, Gholam Hossein Bahmaniar, Mohammad Taghi Kahnamooi, Yasmin

Be the first to review “King Of The Hearts” Cancel reply 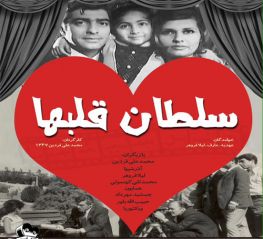