201088 minComedy, Fantasy, Ghadimi, Teenage
+ Playlist
Sign in to add this movie to a playlist.
0

Aunt Cockroach movie: On the day of Reyhaneh’s birthday, the family’s teenage daughter, her brother puts a plastic beetle in her birthday gift box and when it opens, the celebration breaks down. Reyhaneh has a fever and because she does not go to school, her family takes her to her grandmother’s house. At Reyhaneh’s grandmother’s house, she asks him to tell her a story. The grandmother tells her the story of Aunt Suske who lives with her aunt. Due to the high visual capability of the legend of Aunt Suskeh, the director of this film has considered the tools of technology and special effects of Iranian cinema to strengthen the fantasy atmosphere needed for such legends very little. Actors: Sahar Valdebeigi, Ali Soleimani, Forough Qajabgloo, Shah Ali Sarkhani and Farideh Daryamaj Screenplay: Khosro Salehi and Nadereh Turkmani Producer: Javad Norouzebeigi Cinematographer:

Be the first to review “Khale Sooske” Cancel reply 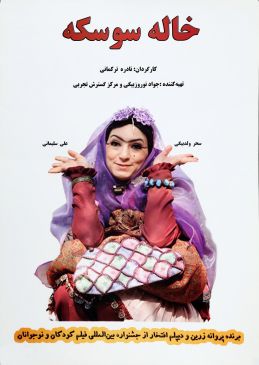