2020100 minBiography, Ejtemaei, Romance
+ Playlist
Sign in to add this movie to a playlist.
0

The film “The world dances with me” went on the screens of cinemas on December 1, 2009 with the presence of prominent actors such as Ali Mosafa, Javad Ezzati, Hanieh Tavassoli, Pejman Jamshidi, Siavash Cheraghipour, Kazem Siyahi, Mehrab Ghasemkhani and… despite the closure of cinemas And the screening of the film due to the outbreak of Corona virus was able to achieve a good sale of 6,748,898,000 Tomans at the box office in the limited time of its release, which is a kind of success for the filmmakers and now after the cinematic release of this The effect of the producers of this film is to continue the screening of this film in the car cinema project in order to try their chances to increase the sales of the film in this project. The film “The World Dancing with Me” was screened for the first time on May 1, 2017 at the 37th Fajr International Film Festival and won two Simorgh Simin Awards for Best Director for Soroush Sehat and a Diploma of Honor for Best Actor for Ali Mosafa in this period. Fajr International Film Festival. 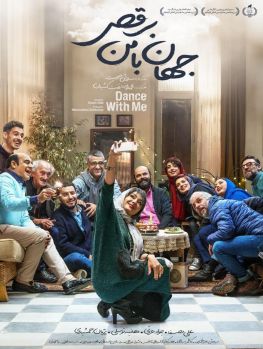