The movie Jabaja: Jabaja: tells the story of a person who is mistaken for a warlord and causes something to happen in his life. The movie “Relocation” is one of the five films that went on the screens of cinemas in Tehran and other cities a week before the due date and before the arrival of Eid al-Fitr. In this comic film that follows the story of the relocation of two people, , Mehran Ghafourian, Mehran Rajabi, Javad Ezzati, Giti Ghasemi, Hamid Lolaei, Shiva Khosrow Mehr, Samaneh Pakdel and… will play. “Hassan Tavakolonia” in this film, in addition to a brotherly relationship with “Ali Tavaklonia”, the director of this film, is in charge of producing the film. The production of Jaboja started in 1990, but the main problem of the film was in the screening license stage, which according to the director of this film could not get its release license for 10 months, and finally the officials agreed to release the film by removing eight minutes from it. In this film, written by Babak Rabiee, Nasser Cheshmeh Azar is also in charge of composing his music. “Ali Tavakolonia,” the film’s director, believes that we have produced this film for the audience to both laugh and think a little about the current situation. The story of the film is about a simple man who moves with a wartime commander.

Be the first to review “Ja Be Ja” Cancel reply 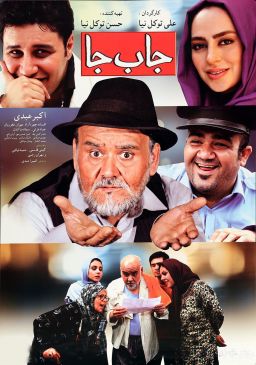