2010Ghadimi, Khanevadegi
+ Playlist
Sign in to add this movie to a playlist.
0

Whatever God Wants: Vandad Taheri is informed that his father has died on Kish Island. At the same time, Parmida Nasiri is informed that her mother had an accident on Kish Island and died. The story of the film begins at Mehrabad Airport, where Vandad Taheri (Hamed Komili) and Parmida Nasiri (Taraneh Alidosti) arrive at the counter at the same time to board a plane bound for Kish, discuss who arrived earlier, and finally get a flight ticket. . After boarding the plane, they find that their seats are next to each other and they inevitably travel together even though they do not know each other very well. When they arrive at Kish Airport together, they also find out that the person who came to greet them is one person and it is Mr. Bidkhori (Saeed Agakhani). On the way to the hotel, they find out that Parmida’s mother and Vandad’s father went to the sea together. And they have disappeared and find out that they got married without knowing about them. Of course, Vandad Taheri, who owns a large company, repeatedly emphasizes that he lost his father years ago and it is impossible for the missing person to be his father. It turns out that the bodies of their parents have also disappeared.

Be the first to review “Harchi Khoda Bekhad” Cancel reply 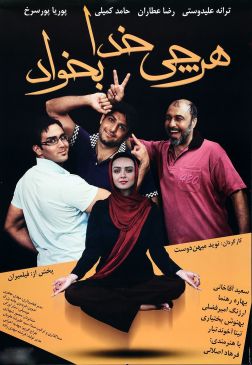