2001Drama, Ejtemaei, Ghadimi
+ Playlist
Sign in to add this movie to a playlist.
0

An annual carnival is scheduled to take place in the Japanese city of Takayamai. A Japanese female designer orders a carpet weaver from Isfahan to weave a rug, but his death in an accident leaves the order unfinished. Her husband Makoto and daughter Sakura come to Iran so that the carpet can be woven, and Akbar and his wife are deceived. Akbar, who is a broker and has already taken the money from the carpet from them, tries to help the father and daughter in weaving the carpet in any way possible in the remaining time. Gradually, Makoto and his daughter developed an intimate relationship with the occupants of the large house where the carpet was woven. Sakura, who became depressed after the death of her mother, regains her joy and connection with a teenager named Roozbeh and the people around her, and Makoto gets to know more about the culture and people of Iran. Weaving the carpet faces a problem every time, but in the end, it continues with the cooperation and will of all its weavers. On the last day, everyone makes a wish and makes a small knot. He and Roozbeh each tie a small knot in green and pink. The carpet is woven and Sakura and her father leave Iran. On the day of the carnival celebration and start, the carpet shows off with those two distinct knots.

Be the first to review “Farsh Baad” Cancel reply 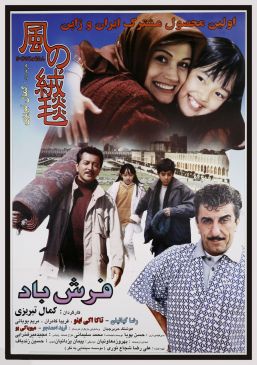