Possibility of acid rain: Manouchehr is sixty years old, he is retired from the tobacco department, but he still goes to the department every day due to unemployment. His mother wished to see his marriage while he was alive. While Manouchehr did not even have a friend in his life except Khosrow. Some members of the Screening License Council believe that the film addresses the issue of homosexuality and that it may even be banned. Meanwhile, “Probability of Acid Rain” was screened with the least margin at the 33rd Fajr Festival, and its screening did not provoke much opposition, despite some political allusions. However, before the screening of the film at the festival, the film had some objections in the screening license council and had been amended several times. The film has won various awards at domestic and foreign festivals, including the Fajr Film Festival Best Screenplay Award, the Talent Award (Best First Film) from the Critics’ Association Celebration, the Netpak Award (Asian Cinema Promotion) in Australia, and the Best Award. The Prague Film Festival Audience Film mentioned the Columbus Festival Special Jury Prize. The film has also been screened at various festivals such as Gothenburg, Mumbai, Zurich, Stockholm, Pune, Perth, Australia and Iranian films in Paris, Cologne, Sydney, Boston, Washington and UCLA.

Be the first to review “Ehtemal Baran Acidi” Cancel reply 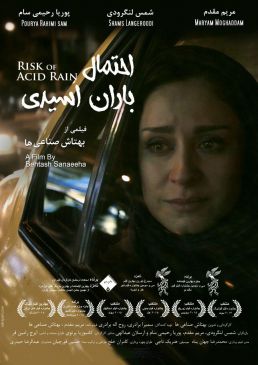