The movie “Life Again” is the story of an old couple named Aslan (played by Shams Langroudi) and Reyhan (played by Gulab Adineh); A loving and noble couple. Aslan insists that he and his wife go to a nursing home and spend the last days of their lives in relative comfort. He, who has already paid for the old people’s home, considers it a place where, if one day they get sick, there is someone who will give them a glass of water. Basil, however, does not insist on going to a nursing home; Until his occasional forgetfulness causes him to lose his home one of those days. After this incident, he also agrees to leave. They lay sheets on all the furniture in the house and get ready to go. Meanwhile, their only child, Amir, calls and announces that he is traveling to Iran with his wife. An incident that causes Aslan and Reyhan to cancel their visit to a nursing home and wait for Amir to arrive with joy and happiness. Amir and his wife had an accident as soon as they arrived in Iran and their family was saddened by their death. Amir Nozad is survived by a daughter who is first the concern and finally the main motivation of this couple for life. Life Again is a romantic and calm film. Gulab Adineh and Shams Langroudi sit well in their plans and bring this tired romance forward. The play of the two and their coordination together, the calmness of the film and its slow rhythm make it pleasant for the audience. The script of this film was written by “Majid Ismaili” and “Amir Mohammad Abdi”. The two pay close attention to the details of the film and give a reason for all the couple’s behavior. Basil’s occasional forgetfulness is a sign of Alzheimer’s that he is aware of. He, who often loses the place of household appliances, writes the location of each of them on a piece of paper and pastes it behind the kitchen curtain, away from Aslan’s eyes. A pleasant secret that, of course, is revealed. On the other hand, Aslan’s insistence on going to a nursing home is not without reason, and he is aware of his brain tumor. The couple, whose home, life, and behavior are more than a sign of generosity, have understandable concerns for the audience, and their aging and slowness are acceptable.

Be the first to review “Dobareh Zendegi” Cancel reply 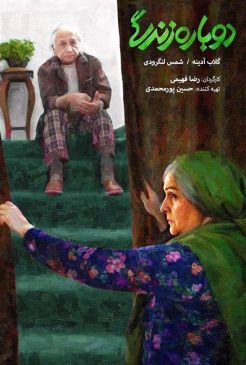