2017100 minEjtemaei, Khanevadegi
+ Playlist
Sign in to add this movie to a playlist.
0

Human comedy: This film is a situation comedy of the tragic life of a person who has to live in harmony with the people around him, despite his inner desire. Mohammad Hadi Karimi, director, writer and producer of “Human Comedy”: “This film was the only story that made me more than a spiritual satisfaction, because in filmmaking, my only excuse for making a story is always a kind of catharsis and personal refinement. لاغیر! But this time, making human comedy was more than just a means of sublimating myself and my audience, it was a goal and a high motivation to continue living in this field. It is very, very hard work in the private sector, without the financial support and the strange money that has paved the way for the cinema. It only happened thanks to friends, and relying on the support and guidance of Him, who has always been my only asset, I started human comedy to the disbelief of those around me who found it impossible to make a film, a film that many would love many times. And live in front of his lovers. According to the creators of this action-packed film, none of the characters have names, and it seems that each of them is an equivalent to the people who are all around us. On December 17, 2017, the human comedy film was released.

Be the first to review “Comedy Ensani” Cancel reply 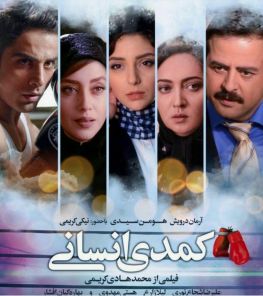