1973103 minEjtemaei, Family, Ghadimi, Khanevadegi
+ Playlist
Sign in to add this movie to a playlist.
0

Restless: Restless: In Restless, Fatemeh (Fakhri Khoroush) and Pouran (Pouran), two widows, meet at the zoo, and Pouran asks Fatemeh to live in her house and together. Pouran is a typist at an institute and knits at home with a machine. Ahmad (Iraj Ghaderi) is interested in him and goes abroad after receiving a scholarship from the company, and Pouran becomes a radio singer. Susie has a friend named Farhad; But Farhad drives her away on the pretext that his mother is stubborn. Ahmad returns from the trip and proposes to Pouran, while Lee Lee is also interested in him. Pouran gives a negative answer to Ahmad because of his daughter. But Lee Lee does not accept. Fatemeh falls ill, and Ahmad protests against Farhad for his treatment of Kobra and persuades him to marry Kobra… Restless is a film directed by Iraj Ghaderi

Be the first to review “Bi Gharar” Cancel reply 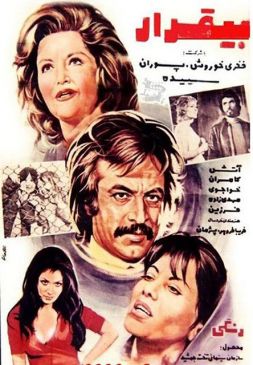