200194 minEjtemaei, Ghadimi
+ Playlist
Sign in to add this movie to a playlist.
0

The fate of three Elamite girls is portrayed in the film: Medina, who is a carpet weaver and is killed by her brother and brother’s friend, for being seen in the city with a soldier who ordered the carpet for her. The second girl is called Nasim. He is accepted into medicine, but his father opposes his education. Despite his father’s opposition, Nasim goes to class, and when he finds out, he goes to university and is severely beaten and taken home from class. The breeze burns itself but survives with a high burn rate. She is the third girl to stay. His father is a simple municipal worker and has several children. The landlord, a 65-year-old man, wants to marry Bemani, ignoring arrears. The father agrees and stays, he is forced to marry. Stay in the husband’s house, he is only a servant, and after a while he goes to the father’s house and burns himself, but survives and is returned to the husband’s house; But her husband no longer accepts her and divorces her. Bemani escapes and goes to the cemetery and sells candles and roses at the suggestion of the dead man, and the two decide to live there.

Be the first to review “Bemani Iranian Movie” Cancel reply 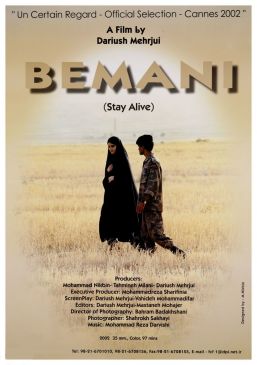