201190 minEjtemaei, Khanevadegi
+ Playlist
Sign in to add this movie to a playlist.
0

Snowflake: The woman who is a piano teacher is faced with a dilemma in the face of a major event in her life, she either has to make a choice according to custom or. . . “Snow on the Pines” has a solid tone and an integrated narrative that fortunately does not fall into the trap of stereotypes to a large extent. We used to see the works of Iranian cinema with a custom story or custom situations, but “Snow on the Pines” is an original work that is not perfect, but it is admirable. Black and white filming is the most prominent feature of the film, which has greatly contributed to the realism of the film. With his first film, Maadi has shown that he is a very intelligent person because he has paid the characters well.

Be the first to review “Barf Rouye Kaajha” Cancel reply 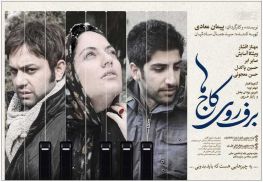