2021Family, Khanevadegi
+ Playlist
Sign in to add this movie to a playlist.
+1

Az Raees Jomhur Padash Nagirid This is a 2008 film directed by Kamal Tabrizi and written by Reza Maghsoudi and Mohammad Rahmanian.
This film was banned in 2009.
But after a long ban and removing some scenes and re-filming and adding new episodes, it was able to get a release license.
The news of the release of this film was met with a negative reaction from the fundamentalists. In this film, Kamal Tabrizi appears in the role of Javad Zarif.

Story: One of the senior managers goes on a pilgrimage quite by accident, and during this trip, things happen to her that do not look pleasant, but all these unpleasant events make her achieve the meaning and concept of the trip. 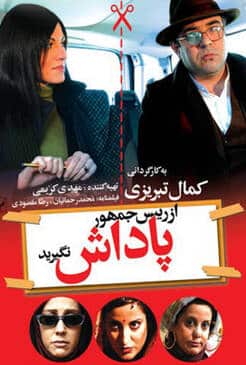