199293 minEjtemaei, Ghadimi
+ Playlist
Sign in to add this movie to a playlist.
0

From Karkheh to the Rhine: In the summary of the story from Karkheh to the Rhine, Saeed, who was blinded by chemical bombs, is sent to Germany with a group of his comrades for treatment. Saeed’s sister Leila, who has lived in Germany for many years with her German husband and son Jonas (Younes), sees Saeed in a nursing home. A deep emotional relationship is established between Saeed and Younes. One of Saeed’s Basij comrades intends to accept asylum in another country, and Saeed and his other friends are protesting his actions. Through the efforts of specialist doctors, one of Saeed’s eyes is treated, but tests performed on him reveal that he has been diagnosed with leukemia due to chemical gases. His wife gives birth in Iran and Saeed dies after unsuccessful treatment. After his death, his sister Leila left for Iran… Hatami Kia, after completing primary and secondary education, studied in the field of experimental sciences: 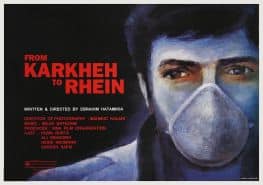