Swan Song: Peyman Fadai, dissatisfied with his father’s decision to send him abroad, organized a party for him. He leaves and goes to his favorite girl, Parasto Arian. Peyman drives Parasto into his car, despite his opposition, but they are arrested at a police checkpoint, while Major Fattah Heydari does not believe in arresting them. The clash between Peyman and one of the police officers while filling out the affidavit worsens the situation and Peyman is imprisoned for beating the police. During his imprisonment, one of the prisoners encouraged him to flee the country. Peyman escapes from the officers at an opportune time and allows himself and Parasto to leave the country by calling the phone number he received from the prisoner. At the Iranian-Turkish border, the forgery of Peyman’s passport is exposed and the matter becomes a miracle of bloody hostage-taking.

Be the first to review “Avaz Ghu” Cancel reply 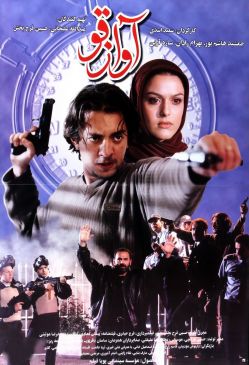