1996Action, Crime, Ghadimi, Thriller
+ Playlist
Sign in to add this movie to a playlist.
0

After the imposed war, Mansour Yeke Taz became the commander of the Anti-Narcotics Headquarters in Sistan and Baluchestan. He is martyred in a clash with death dealers. Zulfiqar, Mansour’s old friend, comrade and comrade, is tasked with destroying the notorious international drug trafficking gang and… drug and arms traffickers in the Balochistan region through one of his leaders, Colonel Mansour. Yekhtaz wants to allow their cargo to pass through the region in exchange for a large sum of dollars. The colonel immediately agrees and, after receiving the money, attacks the smuggling convoy with all his might on the appointed day and arrests them. In Scorpio, actors such as Jamshid Hashempour as Zulfiqar Hosseini, Mohammad Saleh Ala, Atila Pesyani as one of the leaders of the smugglers, Hassan Rezaei as Rahim, Rafi Madadkar, Shahram Zargar and Mina Faramarzi have played roles and actors. In the movie Scorpio, about 33 actors are in front of the camera, and in terms of the number of actors, Scorpio can be considered a great, multi-actor work with a large number of fictional characters. From this point of view, directing the movie Scorpio has been a very difficult task considering playing and managing this number of actors. Other actors in the movie Scorpio can be Reza Moradian, Houshang Dibaian as a mediator, Kazem Hajirazad as a smuggler, Tayeb Sharafati, Mohammad Zakaria, Ibrahim Ezzatkhah, Hossein Charmchi and Mohammad Ahangrani mentioned.

Be the first to review “Aghrab Iranian Movie” Cancel reply 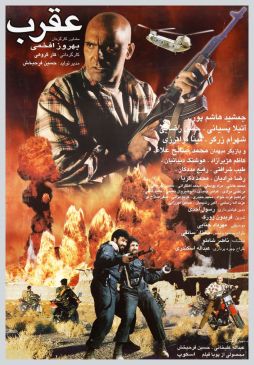