1969106 minDrama, Family, Ghadimi, Khanevadegi
+ Playlist
Sign in to add this movie to a playlist.
0

Mr. Halo: Mr. Halo: A simple-hearted city man comes to Tehran to find a suitable wife. In Tehran, he meets an abusive woman and, thinking that he has found his beloved wife, asks for marriage. The city man soon finds out the truth. However, he does not give up his decision and asks the woman to forget his past and accept his request. The city man is severely beaten by the woman’s lover and in the end he returns to his city without losing his pure heart. Who are the actors in Mr. Halo? In Mr. Halo, actors such as Ali Nasirian, Ezatullah Entezami, Fakhri Khoroush, Mohammad Ali Keshavarz, Ezatullah Navid, Nabipour and Ismail Davarfar have played roles and acted. In Mr. Halo’s film, about 10 actors have gone in front of the camera, and in terms of the number of actors, Mr. Halo can be considered a multi-actor work. From this point of view, directing Mr. Halo’s film has been very difficult considering the number of actors and their management; It should be examined whether Dariush Mehrjoui as a director and as an actor as well as Mr. Halo’s acting team have been able to be successful in this field and show brilliant performances? Other actors in Mr. Halo’s film include Inayat Bakhshi, Mostafazadeh, and Asghar Samsarzadeh.

Be the first to review “Aghaye Haloo” Cancel reply 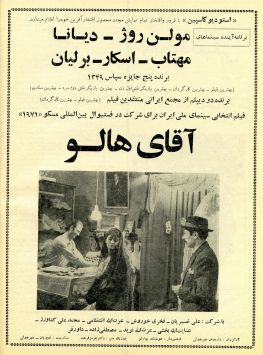