1994102 minComedy, Ejtemaei, Ghadimi
+ Playlist
Sign in to add this movie to a playlist.
0

Snowman Movie: The movie follows and combines two parallel stories. First, an Iranian man named Abbas Khakpour (played by Akbar Abdi) appears on the scene who has gone to Turkey to obtain a US visa but fails to obtain a visa. On the other hand, there is a woman (played by Azita Hajian) who lives in Turkey and works in the hotel where she is staying and cannot return to Iran. Abbas decides to get an American visa by wearing a disguise under the pretext of marrying an American man, but gradually, seeing the world (Azita Hajian), he becomes attached to her and decides to return to his former appearance and, of course, forget about traveling to the United States. He leaves himself to finally return to Iran with the world. Snowman: Social is a comedy film written and directed by Davood Mirbagheri, which was made in 1373. The film was banned for 3 years and was released in 1976 and became the best-selling film of the year.

Be the first to review “Adambarfi” Cancel reply 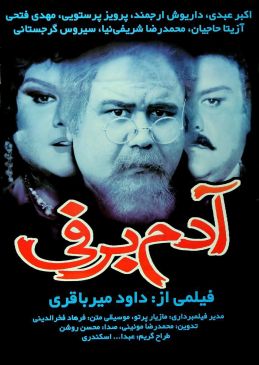