It tells the story of a man who has difficulty communicating with humans and instead interacts very well with animals. He has lived far from Iran for years and now that he has returned he feels he does not know any people. Adam returns to Iran after being expelled from the Australian Zoo on the eve of his grandfather’s death. An obscure will and legacy puts him in the path of the soul (grandfather’s personal doctor) and an emotional relationship is formed between the two. The challenges between the two characters in this film create fantasy situations throughout the film. Made in a fantasy and comedy atmosphere. So far, Majid Javanmard has directed the films “Fox Hunting”, “In Another Land”, “Blood Wedding”, “Sun Blade”, “Wages” and 2. Reza Droudy has been in charge of “Be a Man” investment. “Be human” is a kind of fantasy humor with satirical streaks. Fantasy means the existence of gods that are untrue. In other words, there is no real logic in the film. If I want to give an example, the atmosphere of “Be a Man” is very similar to the “Pink Leopard” series, which has a kind of fantasy humor. “These kinds of jokes don’t happen in real life, but they are inspired by real life.”

Be the first to review “Adam Bash” Cancel reply 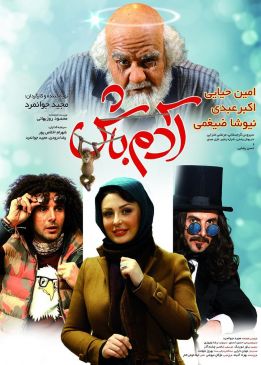