Abadan Eleven 60 is the story of a group of employees of Abadan Oil Radio struggling to maintain the radio and broadcast news in order for the people to resist the Iraqi forces. The movie “Abadan 11 Eleven” directed by Mehrdad Khoshbakht was released on internet platforms from today, Sunday, March 15, and was made available to the public. Alireza Kamali, Hassan Majouni, Vida Javan, Shabnam Goodarzi, Hamidreza Mohammadi and Nader Soleimani will play roles in “Abadan 11 Eleven”. This film is a different story of the zeal of the people of Abadan in defeating the siege of this city at the beginning of the war with Iraq. “Abadan 11 Eleven” succeeded in receiving the Simorgh of Resistance from the 38th Fajr Film Festival and was among the top 5 films of the audience of this period of the festival. Abadan 1160 in costume design has been able to approach the urban space of 1359 to an acceptable level – according to documentary images. The filming puts the viewer in the middle of the scenes and the sound is able to induce the pressure caused by the rain rocket with the least cost. Although the image could have given a more cinematic feel to the film by avoiding multiple screenshots, it is generally associated with the other components of the film and scores well.

Be the first to review “Abadan Iranian Movie” Cancel reply 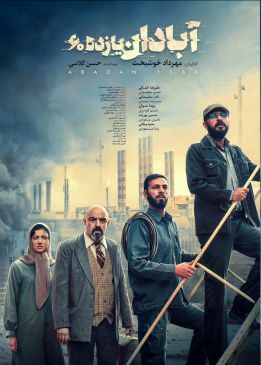