2007103 minComedy, Ejtemaei, Ghadimi
+ Playlist
Sign in to add this movie to a playlist.
0

Four fingers: The narrator is a young man from a city named Fouad who comes to Tehran to work. At the train station, he meets Elham, who is on his way to Tehran for the funeral of his brother, who is a member of the police force and was martyred by miscreants. به Interview with Bahram Radan and Leila Otadi: Bahram Radan: Undoubtedly Bahram Radan with Playing in two roles and with four different make-ups in this film, he has shown one of his good games and has done well. In his interviews, he called this film his best film, even better than Santouri. In fact, in this film, everything happens by him and only his role seems complete. Leila Otadi: As you read in the synopsis, Fouad (Bahram Radan) meets a girl named Elham (Leila Otadi) and is expected to be the leading actress by the end of the film, but she is not only the leading actress but also her role in It is not even a complementary role !!!

Be the first to review “4 Angoshti” Cancel reply 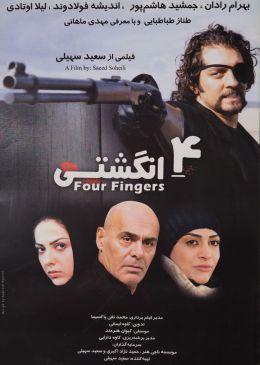