The film 23 People This film is an adaptation of the memoirs of 23 young Iranian fighters who were captured by Iraqi forces during the Iran-Iraq war in 1982. This group was between 13 and 17 years old, and for a long time, the makers of sacred defense and war films in our country have realized that war filmmaking needs to change, and when the facilities and production of a full-fledged war action film are very expensive. , It is better to define war cinema in a new body. (There are exceptions in this bladder, such as the Abu Ghraib Strait, which have been produced at a cost of billions and have not been able to make a profit despite high sales.) War films that are about war but do not feature action scenes have been produced by tasteful directors for years. And are produced and 23 people is the latest case of this genre of films. Among the awards won for this film are Simorgh Zarrin, the best film from the national point of view in the 37th Fajr Film Festival, the sixth best film in the eyes of the spectators of the Fajr Film Festival, the Phoenix Award for the best film, and 6 Crystal Simorghs from the National Will Festival. Fajr and receiving the UNESCO mark from the UNESCO Commission in Iran. Actors: Saeed Aloubadi, Majid Pataki, Reza Nouri, Abdolhalim Taqlabi, Hossein Pourideh, Mohammad Rashno and

Be the first to review “23 People” Cancel reply 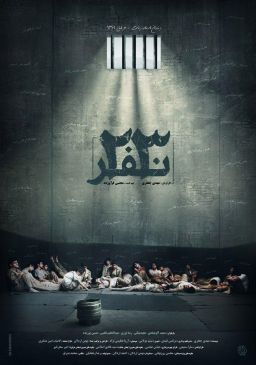